Aeropainting, or aeropittura, was called ‘the daughter of Fascist aviation and Italian futurism‘ by Filippo Tommaso Marinetti, front man of the avant garde futurist movement which emphasised everything that was fast, young, modern, vigorous and violent.  Propelled by Italy’s military preeminence in aviation, aeropittura shifted the Futurist gaze skywards, offering startling and disconcerting perspectives to the viewer and glorifying fast, sleek, polished aerial machines and their pilots.

In the example above, Aerial Battle over the Gulf of Naples or Infernal Battle over the Paradise of the Gulf, Gerardo Dottori imagines a violent dog fight high above an idyllic, peaceful and sunlit Naples set against a dark cloud of dust thrown up by an erupting Vesuvius.

Joseph Stella was an American futurist artist who was born near Naples and who suffered homesickness for Italy.  Known for his industrially inspired work, in Neapolitan Song (1929), an ‘exotic, brilliantly colored landscape depicting a crane, plants and with Vesuvius in the distance,’ his picture is ‘reaching across the sea, bridging the distance between Stella’s old home and his adopted country’. Is the crane shedding a tear for the old country?

The picture is in the Smithsonian American Art Museum.

One of the first collages by Italian Futurist Umberto Boccioni.

Now in the very wonderful Museo del Novecento in Milan, the triangular cutout of a page at the top right hand side carries the lyrics of a popular song that, together with the mandolin, allude to the musical accompaniment of the pre-war lunch enjoyed by the two figures in the shadow of Vesuvius. 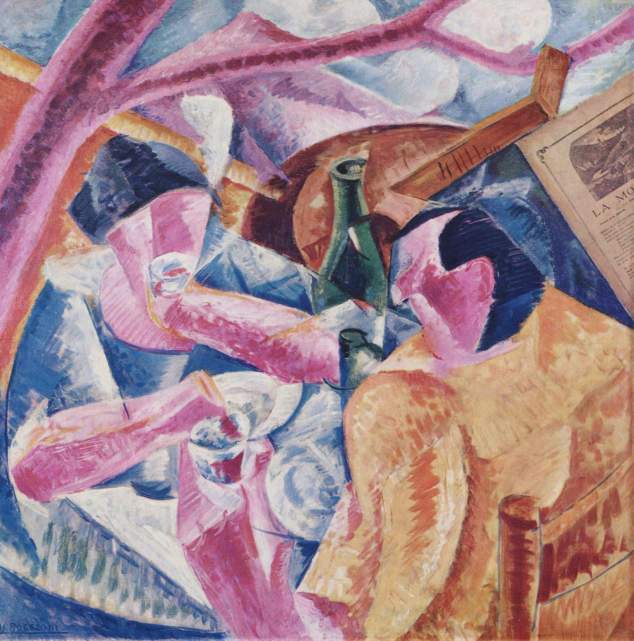 Under The Pergola at Naples 1914